As a teacher it is important to be prepared for student behaviors both positive and negative, as well as how to reward or reprimand them.

At the end of morning centers two out of the four students using the headphones and materials in the listening center stay to clean up the area just like how they found it while the other two students head back to their tables and are getting ready to move on to the next activity. The teacher uses Action Step 1 verbal praise for all four students however she praises the two groups slightly differently. “I’d like to say thank you to a few of our friends for how they ended centers and got ready to learn. Thank you Suzy and Bo for heading back to your seats quietly and getting ready to learn. A super thank you to Camilla and John for cleaning up their center just the way they found it. That will really help the next people who use it!”

A student in Ms. Peters’ kindergarten class had been struggling on the playground with sharing the sand toys. He would frequently take the shovels and buckets from other students and run off laughing. The other students were getting quite upset and no longer wanted to play with the student. Finally another student said to the first how much it was bothering them that he would take the sand toys that they were playing with without asking because they would share with him either way. The first child seemed to have a breakthrough moment with his peers and went over and asked to share and they all played nicely together. The teacher, watching all of this, decided after school (using Action Step 3 Involve the Home in Recognition of Positive Student Behavior), to call the parents and tell them about the playground moment, reflecting positively on the choice the child made to share and work well with peers.

While Ms. Jones is standing at the word wall reviewing sight words with her kindergarten class she notices two students on the carpet not paying attention and playing with something on the floor in between them. Ms. Jones has clear rules about actions on the carpet that are appropriate and not. The expectation for the class is that students should be facing the speaker, listening, watching and participating. Since Ms. Jones knows Action Step 4 is being a “with-it” teacher she is frequently looking around the carpet to check that students are watching, listening and participating. When Ms. Jones notices the two students distracted she beings to use a series of gradual actions to redirect the two students while not distracting the other 18. She first tries to make eye contact with the students. Since they are distracted and looking at the floor this does not work. She then uses a slightly more intrusive technique by moving closer to the students. This does get the students attention. When they look up and my eye contact Ms. Jones is able, with non-verbal facial expressions to redirect the students. She passes by the students with her hand out signaling the student to pass what they were playing with over. At the end of the less Ms. Jones speaks to the children quietly and privately and passes back the taken item reminding them to put it away.

It was March and school was two months away from being over for the summer. In Mrs. Quick’s kindergarten class the students were working on a craft that went along with the story they were reading about caterpillars. The craft required students to cut out circles to make their own caterpillar. One student, Tommy, was known for using scissors the wrong way, often cutting other things or materials. Mrs. Quick had several conversations with Tommy and had even spoken to his parents on an occasion when Tommy had cut the seat sacks their materials were kept in. During the craft Tommy used his scissors to cut another students finished craft in half and then throw the scissors in the air hitting another child in the head. Although they were safety scissors and didn’t hurt the other child it did scare them. Since Tommy had done two things with the scissors that were inappropriate Mrs. Quick felt no choice but to use Action Step 5 Use Direct Cost Consequences. Mrs. Quick promptly removed Tommy from the classroom having him spend a time out for a few minutes in a buddy classroom to think about the choice. When Tommy returned he and Mrs. Quick spoke about the choice and why it wasn’t safe or respectful. Tommy apologized to Mrs. Quick and the other students that were effected.

Below is a Gliffy Positive and Negative Flow Chart 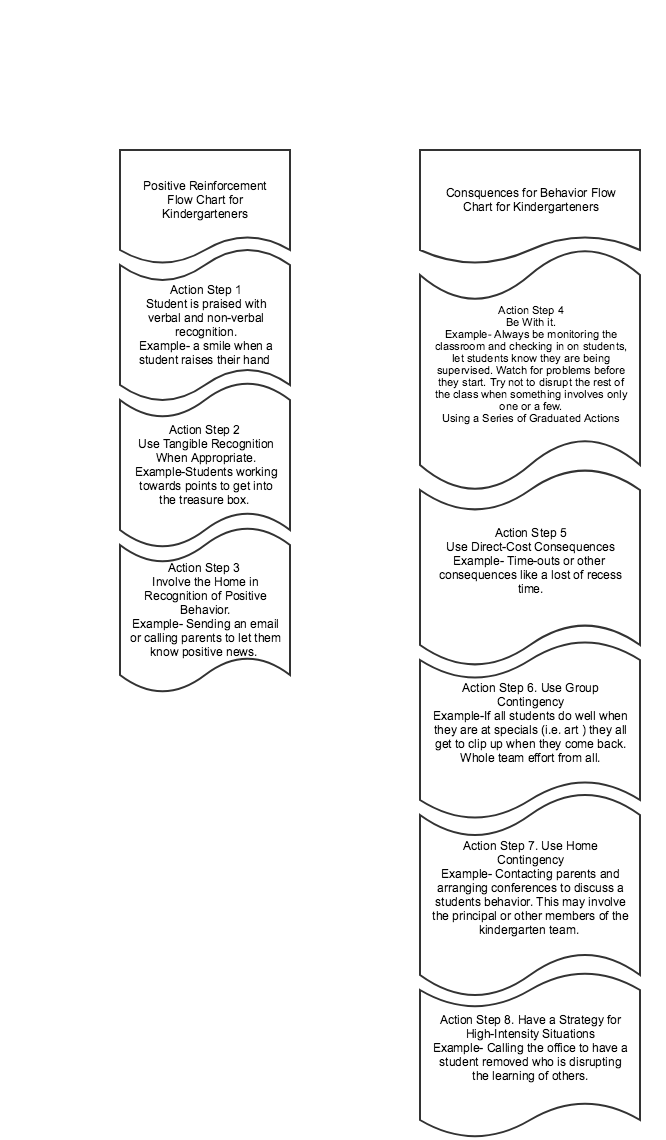 Marzano, R. J. (2010). The Art and Science of Teaching: a Comprehensive Framework for Effective Instruction. Alexandria, Va: Association for Supervision and Curriculum Development.

View all posts by msthompsonsite